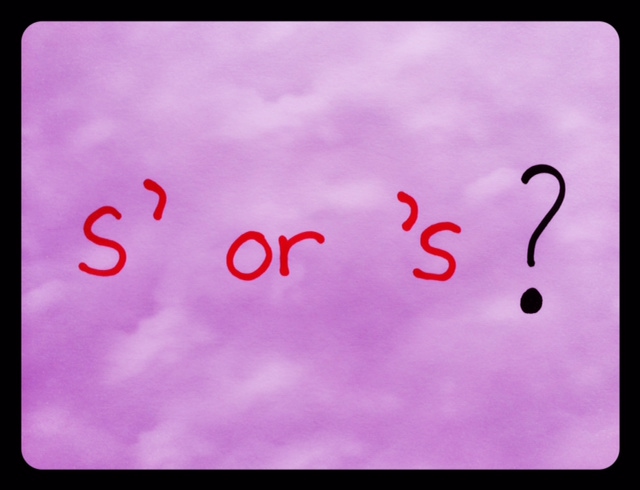 It might not have grabbed your attention, but apostrophe abuse has been in the news lately. After the results of an apostrophe survey were made public, blogs on the topic of the apostrophe surfaced once again. According to the survey carried out by IT firm SpinVox, nearly half of the 2000 UK adults tested were unable to use the apostrophe correctly.

Just consult a couple of English language style guides and you will see that this punctuation mark is one which causes native speakers a lot of trouble. On BBC’s Newsnight, the possibility of actually ditching the apostrophe was even discussed. Should you be toying with the idea of getting rid of the apostrophe, The Guardian’s Style Guide suggests that you take a look at the phrases below before making up your mind.

If you look closely, you will see that each phrase has a different meaning. So one reason to keep the apostrophe is simply to avoid confusion. Although these examples are crystal clear, the rules regarding possessives continue to be disputed. Is it Stephens’s story or Stephens’ story?

Semicolon sparks emotion across the other side of the ocean

One of the most well-known examples is a court’s decision to reject a conservative group’s challenge to a statue regarding gay marriage due to the insertion of a semicolon. “A conservative group had asked the court to order the city to ‘cease and desist issuing marriage licenses to and/or solemnising marriages of same-sex couples; to show cause before the court.’ As the San Francisco Superior Court Judge James Warren explained, the word ‘or’ should have been used instead of the semicolon. ‘I am not trying to be petty here,’ he told reporters, ‘but it is a big deal… That semicolon is a big deal.’”

Americans in general dislike the semicolon and avoid using it. As applied linguist Ann Keating in the article “Pause Celebre” (Financial Times) explains, “Americans see the semicolon as punctuation’s axis of evil.”

Although I do not have any strong feelings about the semicolon, I often avoid using the semicolon just by rewriting copy. My New Year’s resolution, however, is to use use this punctuation mark more often!

This website uses cookies to improve your experience while you navigate through the website. Out of these, the cookies that are categorized as necessary are stored on your browser as they are essential for the working of basic functionalities of the website. We also use third-party cookies that help us analyze and understand how you use this website. These cookies will be stored in your browser only with your consent. You also have the option to opt-out of these cookies. But opting out of some of these cookies may affect your browsing experience.
Necessary Always Enabled
Necessary cookies are absolutely essential for the website to function properly. This category only includes cookies that ensures basic functionalities and security features of the website. These cookies do not store any personal information.
Non-necessary
Any cookies that may not be particularly necessary for the website to function and is used specifically to collect user personal data via analytics, ads, other embedded contents are termed as non-necessary cookies. It is mandatory to procure user consent prior to running these cookies on your website.
SAVE & ACCEPT